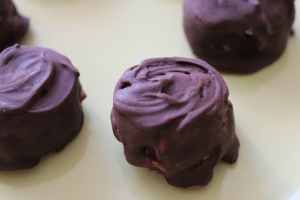 BUT, I had bananas lying around and I have been freezing them for chocolate vegan ice cream, when I thought “why not make homemade chocolate covered banana bites  and make them even BETTER than the ones at the store?!”

AND my friend can make them in Paris. Where she now lives. #notraderjoesinparis #doesntmatternow!

They are great when you’re in the mood for something sweet, because these treats are beyond satisfying AND they are good for you!

– Dark chocolate has antioxidants in it.

– Cinnamon is known to help control your blood sugar which helps with weight loss, it also helps lower cholesterol, and it helps fight cancer.

Fact: Cinnamon is one of my favorite spices, and it’s one of the reasons I came up with “The Skinny Spice.” Read more about all the great cinnamon benefits here. It’s amazing. You will want to eat cinnamon everyday. Consider yourself warned.

1 1/2 tsp coconut oil (Canola oil, sunflower oil, or butter will also work, if you don’t have coconut oil. This makes it easier to coat the frozen banana bites)

1. Slice the bananas into slices (roughly 1/4 in slices) 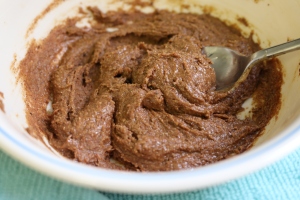 3. On a foil covered tray or dish, make little “almond butter sandwiches” using two banana slices with the chocolate almond butter in-between. Place in freezer for 15-20 minutes or until frozen.

4. In a small pan on low heat, place chocolate and coconut oil and melt. Mix constantly. This only takes a few minutes, and it can burn very easily. When the chocolate is melted, pour it into a small bowl for dipping.

5. This is what your banana bites will look like when they are frozen.  Dip each bite into the melted chocolate. I used my hands when dipping these bites, because it was easier. However if you’re feeling classy, you could use a long pronged fork for grilling or metal stick you would use for toasting marshmallows over a fire. But really, do we neeeed to make this complicated?? Nope. 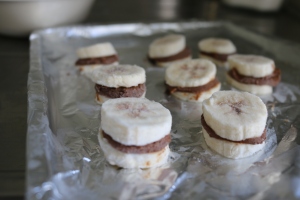 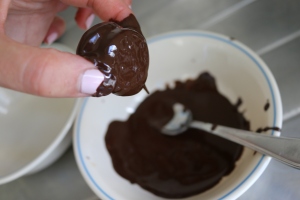 Hint: the chocolate will semi freeze while dipping, because the bites are so cold, so you should let the extra chocolate drip off a little before placing it back on the foiled tray. 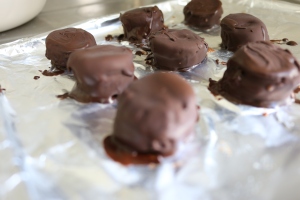 6. Place back in freezer, and eat whenever you desire! 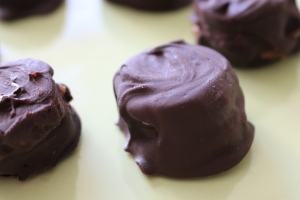